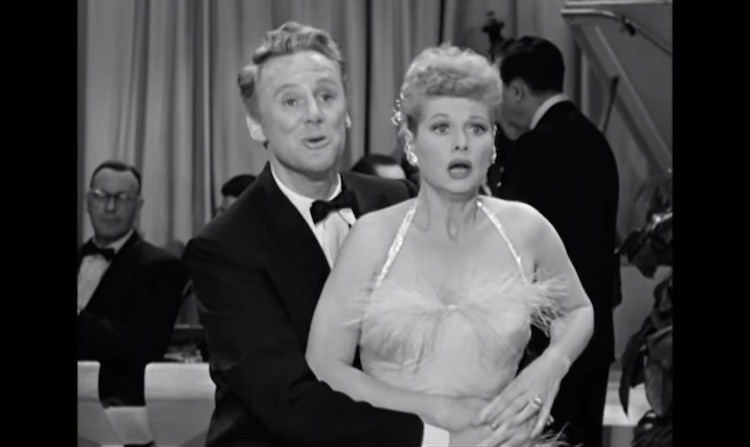 Does it feel to anyone else as if you’ve watched every show in streamland?
It’s especially hard to find great comedies, which feels like the only counterbalance to doomscrolling.
There’s plenty of comedy, but I don’t love awkward, culpable, cringe-at-the-protagonist humor. I have to want to root for at least one of the main players.
Schitt’s Creek and The Good Place are my two favorite recent superstar standouts (with Ted Lasso hot on their heels), and I’m holding onto each episode of their respective final seasons like letters from loved ones.
But as I fill the gaps, I’ve turned to a lifelong favorite from long before I was born, I Love Lucy.
It was a favorite of my mom’s growing up, and she’d put on favorite reruns when I was little. We’d sit around the kitchen table watching Lucy Ricardo — always immaculately dressed in ankle-grazers, a sweater and ballet flats, or a cinched-waist A-line dress — scheming for her moment in the spotlight alongside dashing Cuban bandleader Ricky in their tiny Manhattan apartment.
It’s charming and simple and timeless and uproarious, seemingly with a relatable episode for every life experience. Few days go by when some madcap moment doesn’t remind me of Lucy and her fame-seeking escapades with Ethel.
The chocolate episode and Vitameatavegamin get a lot of attention, but they’re the 101-level episodes.
If you’d like to skip ahead to a few best-of-the-best, here are what I deem the best episodes of I Love Lucy.
The Dancing Star – This is my all-time favorite episode. Lucy tries to impress a visiting friend by claiming to know star performer Van Johnson and dance in his show. One thing leads to another, and Lucy has a chance to join in performing his signature number, How About You?, and she has instant regret. To date, I can’t hear “I like New York in June, how about you?” without thinking of Lucy. I even chose it as the song my dad and I danced to for our father-daughter dance at my wedding. (As a bonus, this episode was recently re-aired in color, with Lucy’s show dress a perfect ballerina pink against her fiery locks and matching blushing.)

I Love Lucy, LA at Last

LA at Last – The Hollywood-set episodes might be my favorites for Lucy’s over-the-top attempts to rub elbows with the stars. Each is a time capsule holding stars of the silver screen — in this case, William Holden at The Brown Derby. (In another, The Tour, Lucy used her own wall and house as the setting for a scene with Richard Widmarck.)
Lucy Goes to the Hospital – The show got very creative with Lucy’s real-life and on-screen pregnancy, including working around censorship rules about using the word. The episodes — including Lucy’s telling Ricky, and Ricky’s labor pains — are adorable, though extremely dated. My favorite moment, though, is when her due date nears, and Ricky and the Mertzes attempt to prepare for the hospital trip. It’s a must-watch for any expectant parents, if only to rejoice that partners no longer need to hover anxiously in a far-away lounge.
There’s something hilarious and relatable about nearly all of them — they’re timeless and the light escapism I need these days.
You can watch full episodes of I Love Lucy through CBS.
Other great, funny favorites over the years include Broad City, 30 Rock, the original seasons of Arrested Development and dabbling in old episodes of Cheers on Netflix. What are some of your favorite funny shows? I’d love to add to the queue.